Leveraging off strong demand in the oil & gas industry, WA owned and operated heavy drilling company Enerdrill Pty Ltd, will today unveil its two drilling rigs and its workover rig at an Open Day in Mandurah.

The Company’s drilling rigs, one of which is Australia’s largest onshore heavy oil and gas rig, were specifically designed with high levels of reliability and redundancy to suit Australia’s harsh environment. 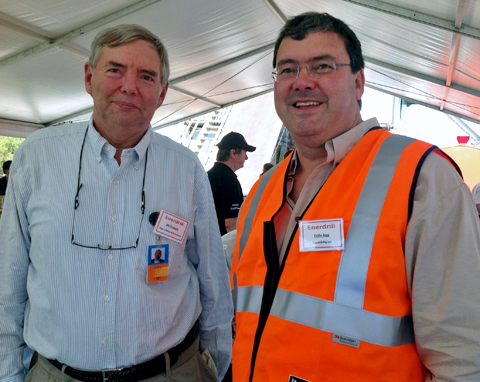 Speaking from the launch, Enerdrill’s Chairman Dermot O’Keeffe said the founders of the Company had identified an opportunity in the market to address the limited supply of suitable large drilling rigs available within Australia.

“Oil and Gas drilling programs have historically been hindered in Western Australia, Northern Territory and South Australian due to the shortage of suitable rigs. This is despite more than one billion Australian dollars of farm-in agreements being signed in these regions over the last couple of years. Just this week Chevron and Beach Energy announced the latest of these farm-in agreements worth $349 million,” he said.

“Enerdrill’s goal is to provide oil and gas operators with the highest levels of safety, quality, reliability, and service that have ever been available in Australia, such that the quality of service received by our clients becomes the new industry benchmark,” he added.

“Being locally owned and operated, Enerdrill can make decisions quickly. This enables us to be responsive to the requirements of our clients and the onshore industry, and not dependent on offshore funding availability or decision making. This is demonstrated in our decision to import Rig 3 from Canada without a contract in hand.”

The Managing Director of Enerdrill, John Wells said drilling in the Canning, Cooper and Perth Basins is very different to drilling in other locations around the world due to the remote and harsh operating environment.

“Enerdrill’s team has many decades of experience operating throughout Australia’s major onshore basins. This cumulative experience has driven the style and design of rig that we have chosen to build.”

Enerdrill, which is fully funded, is backed by leading WA companies including Argonaut and Bonnie Rock Transport, and is supported by various leading local investors.

As Enerdrill ramps up its operations from this month, the Company will begin a recruitment campaign aimed at employing a workforce of up to 150 employees in the next year.

Images from the event are available here.

Based in Western Australia, Enerdrill provides drilling services to the onshore oil & gas, and geothermal sectors. Led by an experienced team of industry professionals, Enerdrill owns two large drilling rigs and a workover rig, providing the capability of drilling from depths of less than 2,000 metres to 5,500 metres. Enerdrill’s rigs are designed to handle the rigours of drilling in harsh environments such as those often encountered in Australia’s remote areas.