Rigging up a venture to target bigger rivals

Rigging up a venture to target bigger rivals

A GROUP of well-known Perth businessmen has launched a home-grown oil and gas drilling venture, in a twist on the maxim that the guys selling shovels make the most money out of a gold rush. 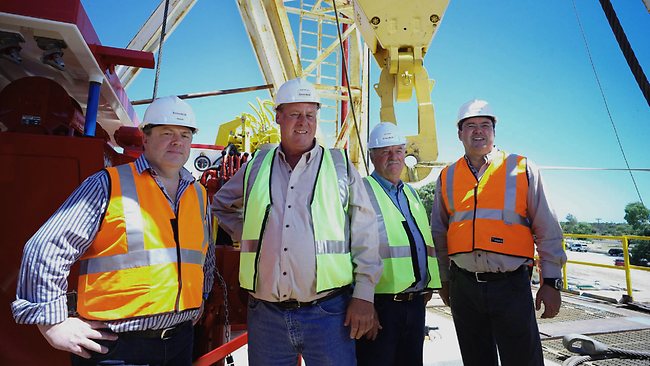 Eddie Rigg and Charlie Fear, founders of Perth-based boutique investment bank Argonaut, have teamed up with local trucking magnate Jim Currie and drilling veteran John Wells — and the appropriateness of having men named Rigg and Wells in charge of a drilling company is not lost on them — to found Enerdrill.

It's a private group looking to cash in on the rise of the shale gas industry in Western Australia. According to records lodged with Australian Securities & Investments Commission, the group also has brought in local Perth business identities such as Navitas founder Rod Jones and mining corporate finance specialist Craig Burton as early investors.

Enerdrill has assembled a fleet of three drilling rigs, including a behemoth heavy-duty rig imported from Canada that will be one of the few of its kind on its side of the continent, with a replacement value of more than $50 million. The hope is that Enerdrill can start filling the big gap between the supply of heavy-duty drilling rigs in Australia and the ever-growing demand.

The founders and their backers have bet on winning business from Australia's early stage but expanding shale oil and gas industry. "It's a concept we identified five or six years ago, that there was a lack of heavy drill rigs in Australia," Rigg tells The Australian.

Several companies have complained that their exploration programs have been stalled by a shortage of rigs, and rigs have not always been of the highest quality.

Just last month, Perth-based New Standard Energy and its US joint venture partner, ConocoPhillips, cancelled a drilling contract with a rig operator because of "safety, competency and operational performance".

Although the shale oil and gas industry is still in its infancy in Australia and suitable rigs are in short supply, Rigg notes that major multinationals have spent more than $1 billion establishing land positions in the country's most promising shale basins.

Just last week, US-based giant Chevron committed to spend $US349m ($344m) to earn a 60 per cent interest in two Beach Energy permits on the South Australia-Queensland border.
"The Conocos and the Chevrons of the world have spent big amounts of money on opportunities here in Australia, but there's a massive shortage of quality drill rigs available," Rigg says.

The main rig at Enerdrill has been designed and customised to endure the tough conditions in the Australian outback, with the rig boasting high levels of built-in redundancy that will allow it to operate in remote locations where sourcing technical support would otherwise be a major delay.

The drilling market in Australia is dominated by multinationals, but Rigg expects Enerdrill to beat its bigger rivals on cost and service.

Based on employee numbers, Enerdrill could end up dwarfing Argonaut itself. By the end of the year Enerdrill is forecast to have 150 employees, compared with the 65 working at Argonaut.

The investment banking backgrounds of Rigg and Fear suggest that a float or trade sale may never be far away. But Rigg says he and his partners are committed to giving the business a good crack on their own.

"If this business does what we expect it to do, it will be very profitable," Rigg says. "We've not just put this together to float it."

The company is still looking to secure its first contract, but Rigg says letters of intent have already been signed with several potential customers.